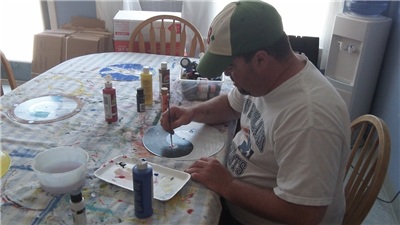 Studio 35 participant finds the artist within himself

Hyannis, MA – August 29, 2012 – For quite some time now, residents at the Dorothy Bearse Apartments at Fellowship Health Resources, Inc. (FHR) have been dabbling in the arts as part of Studio 35, FHR’s diverse healing arts program.

One participant, John W., said that he never really thought of himself as an artist before. Although he used to make his parents cards when he was younger, and has been playing the guitar and writing songs since he was 15 years old, he never considered himself an accomplished artist until he began working with others as part of Studio 35.

John grew to enjoy creating art on old LP records, and was inspired enough to share his artwork with his aunt one day. Impressed by his work, his aunt suggested that he could turn the record into a clock. That is exactly what John has done; he calls his art “Record Time” and has begun a small business for himself, selling each “Record Time” piece for $35.

Peer Support Worker Mary Munsell says that John’s initiative and commitment to Studio 35 at the Dorothy Bearse Apartments has been empowering to watch. “I like making art if it makes other people happy,” John says.

For more information about “Record Time” or to purchase a piece, please contact Cape Cod Regional Director Nancy Murray at 508-495-1594.