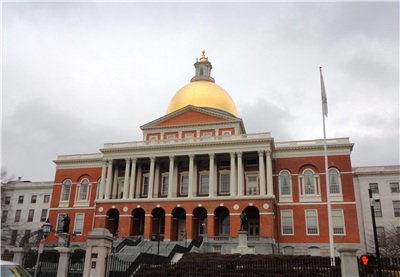 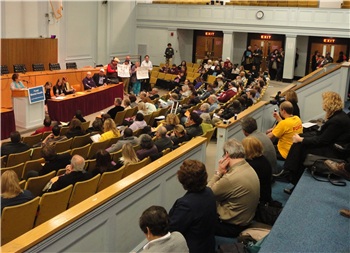 “We’re here as a unified voice to promote increased funding for mental health services for our persons served,” says FHR President/CEO Joe Dziobek. One of the speakers at the morning rally compared cutting funds in mental health to that in cardiac surgery stating, “You would never see budget cuts as deep as you do in mental health in a cardiac unit of a hospital. We are saving lives every day and this funding is just as important.”

Fundmentalhealth.org assembled the rally in Gardner Auditorium at the State House to organize mental health service providers before sending participants to meet with local state representatives. National Consumer Leader and U.S. War Veteran Mo Armstrong, of Connecticut, was just one of the speakers at the rally who received a standing ovation.

“We need the American public and our state representatives on our side,” he explained. “This message isn’t on TV. We have to spread awareness in order to save more lives. We can’t ignore the fact that we’re going to have thousands of veterans returning from war who will need services provided to them like I did.”

FHR staff members from Fall River had the opportunity to meet with Representative David Sullivan. “We talked about affordable housing and the funds that are necessary for high quality mental health services. These are two of the biggest issues in our community,” says Recovery Advocate Aimee Pontes.

“Representative Sullivan suggested creating a Peer Caucus of legislators who are already involved to create a plan,” Dziobek explains. “He was very receptive to our employees and had some proactive ideas of his own to share with us.”

Fundmentalhealth.org says that spreading awareness is significant to restoring budget cuts. Staff members across the state wore green, the mental health awareness color, on the day of this event to support Mental Health Awareness Day.

“My three children actually went to school today dressed in green,” says Pontes. “I think that awareness needs to begin at the elementary level. We talk about substance abuse to our kids, but we don’t talk about mental illness. Funding mental health services is cost-effective, and it’s consistent with the core principles of a humane community.”

To support increased state funding, contact your state legislators and urge them to increase funding for the Department of Mental Health. Visit www.fundmentalhealth.org to sign up for the campaign and to write a letter to your local State Senator/Representative and/or to your local newspaper.