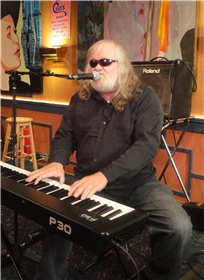 Six Studio 35 performers had the opportunity to participate in an afternoon jam session with Neel prior to the concert. “Johnny Neel really embraced the whole idea of recovery through the arts,” Dziobek said. “He’s a gifted musician and shared his talent with each individual performing tonight. Everyone’s had a wonderful time getting to know Johnny and listening to him play. We couldn’t be any more appreciative of his commitment to our program.”

The opening lineup for Neel’s performance was made up of FHR persons served, clinicians, and a board member from Fall River, New Bedford, and Rhode Island. “They were all so great,” Neel said. “I didn’t know a lot about recovery from mental illnesses and substance abuse before setting up this concert. But as a musician, it means so much to play for a crowd that has a true appreciation for the music. I could be playing at just another show at a bar or club. But tonight, playing at this Studio 35 concert is something really special for me.”

David Richardson, a clinician at FHR, was one of the performers who had the chance to work with Neel. “I planned to perform an original song with my guitar, hoping that Johnny Neel would join in on his keyboard,” Richardson said. “After playing together, he asked if I would accompany him during his own performance.”

Neel called Richardson up on stage for a blues number during the show. Hearing the two play together was one of the many highlights of the night. “[Neel and Richardson] were phenomenal. Every performer tonight really shined on stage,” Dziobek said. “I’m incredibly proud of all the work and talent that we saw here tonight.” 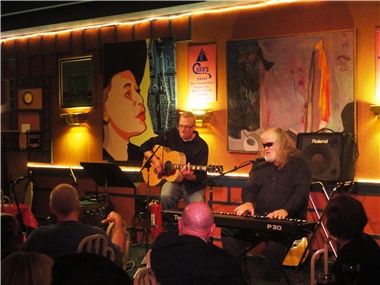 Many FHR persons served, family, friends, and sponsors were in attendance at the concert. Original artwork by Studio 35 artists was also on sale during the show. “Studio 35 members in Rhode Island participate in weekly art classes at PeaceLove Studios,” Dziobek said. “The founder of PeaceLove, Jeffrey Sparr, was kind enough to donate a piece of his work to benefit our program.”

All proceeds from the concert benefit Studio 35. “Corporate sponsorships and money raised will provide funding for music education and instruction for FHR consumers, as well as instruments, art supplies, and other materials needed to foster a truly therapeutic arts and recovery program,” Dziobek says.

To conclude the night, Studio 35 performers joined Dziobek and Neel on stage to debut the official Studio 35 theme song called Come Alive with Studio 35. “I hope that this night was as inspiring for everyone else as it was for me,” Dziobek said. “The theme song says it all. Grab a brush, play a note, we’ll play along. Everyone at FHR is here to support you and your individuality.”