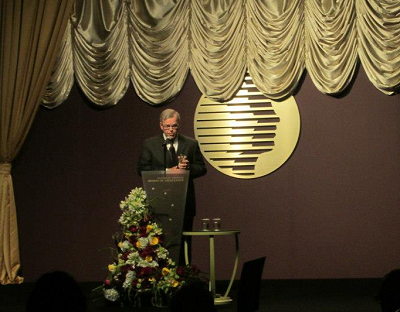 Las Vegas, NV – Surrounded by nearly 4,000 healthcare executives, providers, and advocates from around the country, Fellowship Health Resources’ (FHR) President/CEO Joe Dziobek was honored as the recipient of the National Council for Behavioral Healthcare’s (National Council) Visionary Leadership award. Former First Lady and founder of the Carter Center, Rosalynn Carter, was the guest of honor at the April 9 ceremony, which also celebrated the 50th anniversary of the Community Mental Health Act signed into law by President John F. Kennedy in 1963.

The National Council, comprised of 1,950 member organizations, serves more than eight million individuals across the country suffering from mental illness and addiction disorders. Acting as a forceful advocate for healthcare policies, the association ensures that those in need have access to comprehensive services. The National Council conference, now in its 43rd year, honors individuals that reflect the most inspirational work taking place nationwide in the behavioral health field each year.

Dziobek’s innovative efforts have been highlighted through FHR’s geographic expansion and the establishment of the agency’s Department of Health and Wellness, Office of Peer Recovery Services, and Studio 35, an organization-wide healing arts and recovery program. Dziobek has most recently led FHR through a strategic planning process, focused on the development of children’s mental health services and the integration of physical and behavioral health services. His motto “we never give up on anybody,” has consistently been demonstrated throughout his career through his unique vision and commitment to all of FHR's staff and persons served.

FHR, headquartered in Lincoln, Rhode Island, is a nonprofit behavioral healthcare agency providing clinical and support services to persons recovering from mental illness, co-occurring disorders, and other life challenges. With programs in seven states along the East Coast, FHR assists nearly 3,500 individuals each year in improving their behavioral health, well-being, and quality of life.

Dziobek’s began his 38-year tenure in 1975, as an FHR Mental Health Counselor in West Warwick, Rhode Island. He then became Director of Programs in 1983, and was named President/CEO one year later. During this period, Dziobek is credited with the expansion of 74 programs in seven states, and the agency’s growth from $1 to over $33 million in annual revenue.

“Throughout the evening, we heard of the struggles and advancements within the mental health field throughout the last 50 years, which made me reflect on FHR’s mission and the significant contributions Joe has made in breaking down the barriers of stigma and thinking outside of the box for alternative treatment methods,” said Pamela Daisey, FHR Interim COO. “This award showcases Joe’s many accomplishments, the guidance and mentorship he provides all FHR staff, but above all, the personal impact he has had in instilling hope that recovery is real.”

“To be chosen as a Visionary Leader by the National Council is truly gratifying. As I listened to other award winners and learned about their accomplishments, I felt humbled to be included in such a talented and dedicated group of people,” said Dziobek. “I accept this award on behalf of FHR and its colleagues, board members, and all of those who benefit from our support.”

“After fifty years of outstanding work in community mental health, our nation is realizing that it is time to bring mental illness out of the shadows,” commented Linda Rosenberg, President and CEO of the National Council. “Our honorees are helping us advance toward this new frontier one piece of art, one program, one scientific breakthrough, one public policy of success, and one story of hope at a time. We applaud their selflessness, their service, and their sense of commitment.”