November 9, 2015 - Providence, RI – FHR (Fellowship Health Resources, Inc.) hosted its 40th Anniversary Celebration at Roger Williams Park Casino in efforts to raise awareness and support for individuals in recovery from mental illness and addiction disorders. Proceeds from the event, which totaled $75,000, will directly impact the individuals served by FHR across 8 states, enabling FHR to continue to provide person-centered care in its variety of residential, educational, clinical, and therapeutic services.

Community partners, supporters, and FHR’s Board of Directors and staff joined in commemorating the organization’s 40 year history, learning about the importance of the crucial services FHR continues to provide in the community.

“FHR opened its first program in Warwick, Rhode Island, in 1975 – the first Community Residence in the state of Rhode Island. The program had 6 staff and served 12 individuals,” said Colin Murphy, Board of Directors Secretary. “Our organization has steadily grown since then, and now successfully runs 80 programs which support 4,500 individuals every day.” 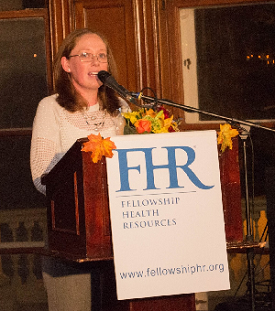 The evening included a silent auction and musical performances by Meg Hutchinson, who shared her experiences living with bipolar disorder through song. A Journey of Recovery video was also presented, in which Lisa Boulanger (shown left), someone who has both received services and been employed by FHR, spoke about how she was able to overcome major obstacles in her life with the organization’s support.

“Without FHR, I wouldn’t be where I am,” said Lisa. “I thank them for being an organization that sees each individual for who they are as a person. As a person who may have a diagnosis, but that not being what defines them.”

The $75,000 raised, a fundraising record for the organization, was made possible through a number of community supporters, especially platinum sponsor Starkweather & Shepley. A Board Member Challenge was also initiated, which drew financial support from FHR’s board members totaling over $20,000.

Closing remarks urged attendees to continue to be mental health advocates in their communities and thanked them for their support in empowering thousands of individuals like Lisa to live more independent and fulfilling lives.

“Working together, with all of our supporters, I am confident that FHR will continue to expand the national conversation about mental illness and recovery, assist in educating the public, reducing the stigma surrounding mental illness, and counter those that would have you believe that individuals in recovery cannot be productive citizens,” said Debra M. Paul, FHR President & CEO. “We can and will help people everywhere understand that with the right supports and compassion, recovery is possible.”