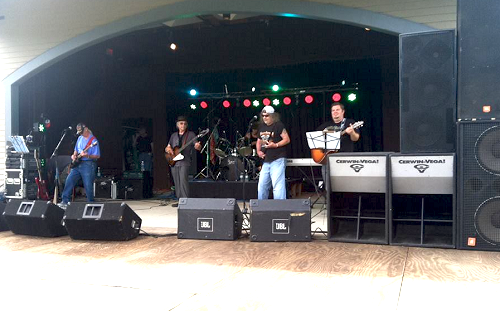 Through FHR’s healing arts program, Studio 35, the All-Star band has used music as a form of self-expression and a tool in recovery. By integrating music into traditional therapy, persons served at the Fall River, Massachusetts, Townhouse have continued to gain confidence as they practice weekly as a band. Performing classic rock hits like ‘Rocky Mountain Way’ and ‘Brown Eyed Girl’, Frank Pace and the All-Star Band have performed live at venues and open mic sessions in the New England area.

This annual concert, organized by Grace and Jack Young, is made possible through a network of individuals and businesses in the community, as well as talented local bands that play free of charge. For many that are involved in supporting the concert, the fundraiser is a positive outlet to focus on, and help to make a difference in the lives of people in need.

“Being able to give back and help support this important cause is an honor,” said FHR Townhouse Program Director Frank Pace. “Everyone who is here today has given heartfelt and emotional performances. It’s been a very inspirational day.”

What’s next for Frank Pace and the All-Star band? Pace shared that performing at Particle Accelerator has motivated the band to continue practicing and building upon their set list. The All-Stars also look forward to performing at numerous Studio 35 events going on throughout the agency this summer.